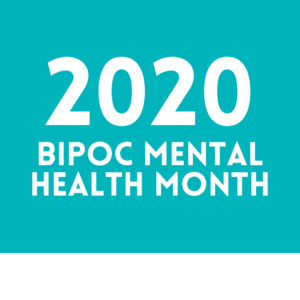 Bebe Moore Campbell was a best-selling author and journalist. Her mental health advocacy earned her the posthumous honor of July being designated by the U.S. House of Representatives as “Bebe Moore Campbell Minority Mental Health Month” in 2008.

Mental Health America (MHA) has honored Ms. Campbell’s memory each year by dedicating a mental health toolkit in July to the mental health needs of traditionally underserved and underrepresented populations. In our work, we have tried both to elevate voices in these communities and to improve understanding of the mental health challenges they face.

In recent weeks, our country has awakened to the longstanding effects of racism and bigotry, including the effects on mental health. This includes the racism and bigotry that have been built into systems of care, services, and supports that often went unchecked and unmentioned.

That systemic racism and bigotry have had terrible consequences for so many people. As the Brookings Center has reported, Black, Indigenous, and Latinx people in the United States have all experienced higher infection and death rates from COVID-19. At MHA, we have also documented greater mental health impacts on people who identify as Asian or Pacific Islander or of mixed race.

The same has been true for a long time for people who identify as LGBTQ+. And so, for this July MHA has developed content that is both timely and hopefully evergreen. We have included: links to updated information on our website; lists of resources specifically for Black, Indigenous People of Color (BIPOC) and LGBTQ+ communities; handouts on racism and mental health and racial trauma; an infographic built from MHA screening data on BIPOC and LGBTQ+ mental health; and more - including a Call to Action for people to share how discrimination and/or racism have affected their mental health, using the hashtag #ImpactofTrauma.

And because people and language evolve, we have chosen to remove the word “minority” from our toolkit and will be phasing it out on our materials. Instead, we are using a different designation – BIPOC – that we believe more fairly honors and distinguishes the experiences of Blacks, Indigenous People, and People of Color.

We welcome your feedback.

If you’ve ever watched an older adult in your life do something you consider strange, there is often a reason for the way they are acting. For example, maybe one’s grandparent doesn’t trust banks and keeps cash on hand instead of using credit. If your grandparents grew up in the 1920s in the U.S., they lived through the Great Depression. This major event made a profound impact on their lives, and the effects last until this day. Maybe even in the way they raised their children.

When people hear the word “trauma,” they often think of a frightening event or a horrible disaster happening to someone. Sexual assault, exposure to violence or war, accidents, and natural disasters are some major events that can traumatize people.

Immediately after the event, shock and denial are typical. Longer-term reactions include unpredictable emotions, flashbacks, strained relationships, and even physical symptoms like headaches or nausea. While these feelings are normal, some people have difficulty moving on with their lives.

People can carry trauma throughout generations due to historical adversities, violence, and oppression. Sometimes, our daily lives are influenced by trauma that we aren’t even aware of. Trauma is a deeply distressing or disturbing experience, and those who identify as BIPOC - especially queer and trans people - can often recount tales of actions, words, and events that have made a deep impact on the way they live, speak, and think.

For us to understand the impacts of trauma, we have to use an intersectional lens that helps us look beyond one experience, but think about historical factors, systems and more that influence our thinking and emotional wellbeing.

MHA wants to create an opportunity where people can listen and learn from each other about why it’s important to talk about racism and mental health and how it’s affected them.

Share how racism has affected your mental health with the hashtag #ImpactOfTrauma and show others how you are resilient. Whether it’s a text post, a piece of art, or a video, tell your story so that we can amplify it.